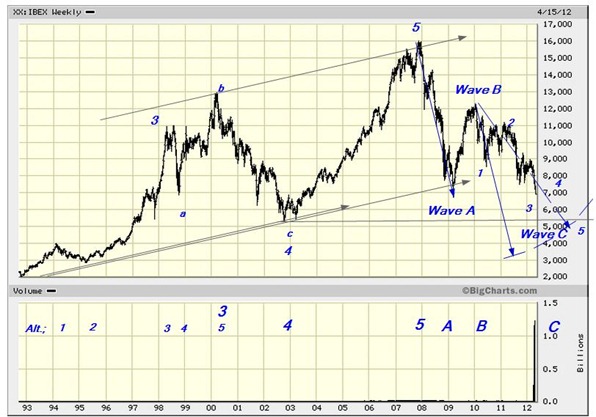 I found it intriguing that a 3 bln. refinancing of government debt would be received by the market as a bullish event whereas last months borrowings by Spain’s central bank on behalf of it’s banking system of about 450 billion Euros (up 53% over the previous month) goes almost unnoticed. There is either a wilful blindness or an unwarranted confidence in Governments or Central Banks to repair the imbalances.

From an EW perspective this index is relatively easy to analyze. Normally, corrections of bull markets exhaust themselves more or less at the level of wave 4 of previous degree, or lower. In this case that would be roughly 5000. These corrections take the form of A-B-C in which the C should be 5 separate waves, as shown. Most often C is as large, or larger , than A. Should this happen the index will have lost at least 70% of the peak value of 16000. This is not as dramatic as it sounds as that is where the index was just 10 years ago. This begs the question what part of all this is “abnormal” , the 5-year rise from 5000 to 16000, or the 5-year drop now. Could it be that Ron Paul is onto something by advocating the abolishment of the Fed?

Until as recently as 1978 Spain was effectively a dictatorship. It has no industry worth speaking of and its main “business” is that of supplying the northerners of Europe with a place to over-indulge in all those hedonistic activities that are not done at home. In pursuit of which, the country now has many more empty homes than the US. Clearly present management got caught up in the twin blessings of Greenspan cheap money and the various convergences that were supposed to attend the creation of the Euro. No amount of olive oil or oranges and suntans will pay for an orderly exit.