The Maestro spoke again today, this time to let us know that stocks are dirt cheap and can only go one way given the present p/e ratio and that is up. Just for the record we thought it might be instructive to see when exactly it was that the maestro uttered his most famous words, “irrational exuberance”. It was on the 5th of December 1996, during a speech entitled “The Challenge of Central Banking in a Democratic Society”. On the chart below of the DOW there is a red arrow to show when that was; 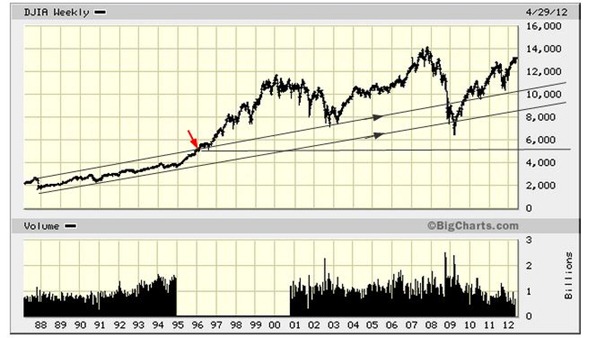 In the previous ten years the Dow had tripled in value. Since then 16 years have gone by and the Dow is at roughly 13000, implying a compound growth rate of 5.1% (which does not include dividends), which is much higher than the long-term growth rate. This begs the question why exuberance then and a buying opportunity now?

The answer, I would suggest, can be found in parts of that speech particularly when the maestro says, “We as Central Bankers need not be concerned if a collapsing financial bubble does not threaten to impair the real economy, its production, jobs and price stability”.It is almost as if these guys , like ostriches, bury their heads in the sands of the world of academia and are completely disconnected from the real world.