Nothing in North America seems to work all that well, the Australian index however is performing pretty much as expected. (see previous blog): 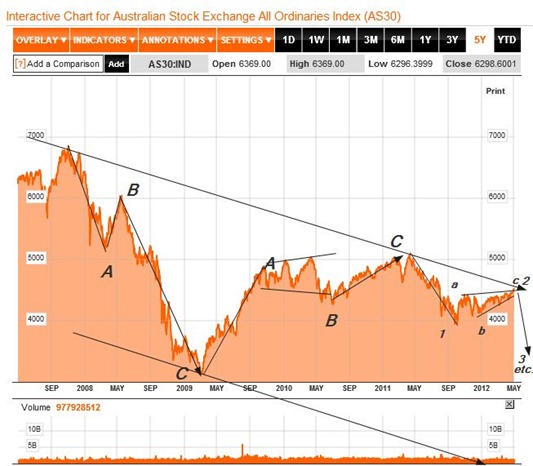 This index has been remarkable consistent. In approximate terms it loses 50%, then regains 50%, loses 50% and regains 50%. It is presently right at a large trend-line and the next move is down 50% except that we are now about to enter wave 3 down and that should normally be the most forceful and longest . As a minimum one would expect it to at least equal wave 1, roughly 1000 points, 1600 is far more common and then there is still a 5th wave to go.

What is remarkable about this index is that is highly dependent on China, generally considered to be the growth engine of the World today. Secondly it is also an exporter of raw materials first and foremost. As a consequence one would think that this index should have some prognostic value with respect to Canada’s TSX. Here it is; 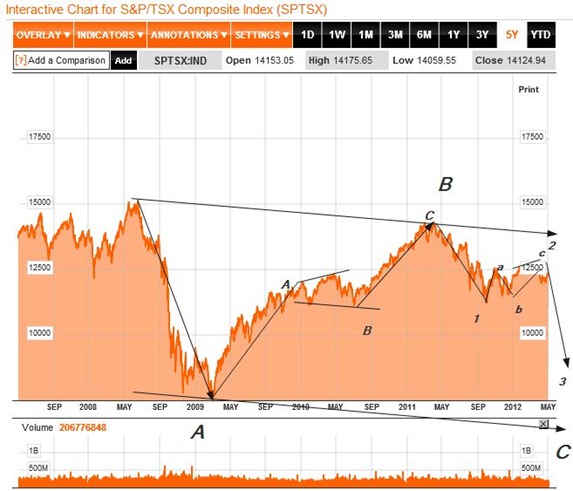 Notice that “essentially” the charts are very similar except that the Canadian index has relatively larger retracements and as a consequence has stayed closer to peak values. In all other respects they do seem to be listening to the same drummer and what is not yet evident in Canada is already painfully so in Australia. The question for us, living next to the US (bad economy)and them living next to China (good economy) should be, why are we doing better? or are we and is this just a unsustainable fluke. Could it be that we have better leaders, a more entrepreneurial people, a more competitive industry? Don’t think so.