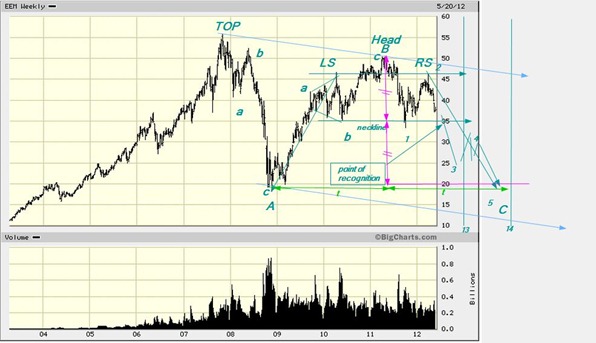 We correctly (within a single dollar) anticipated the high point of the “right shoulder” and the subsequent drop (so far at least). So it is a good time to have another look. In EW terms the Great Recession drop was wave A, the very large rebound wave B that did not double–top by a mere $5 or so, and now we are in wave C. Wave C should unfold in 5 separate waves so that the entire structure becomes a flat, which, as the name more or less suggests is a mostly sideways structure which subdivides as a 3-3-5. The C-wave, more often than not is the longest, perhaps as a result of the investor having to go through the same humiliating experience twice, usually having learned nothing the first time which gives the structure a slightly downward skew.

EW , which, for the most part, is pattern recognition does not use the H&S pattern as such. It, the H&S pattern, has its origins in the DOW theory, but a pattern is a pattern and the predictive value is recognizing it before everybody else does. Using this in the above chart we have draw the “neckline” horizontally at about $35. Neckline is a bit of a misnomer, armpit line would describe it better. In any event that is the level of support, when it is broken there is a void underneath and the stock should drop by an amount equal to the amount the head sticks out above the neckline. In this case that is at the $20 level. EW has the point of recognition which is where the bulls realise that the are barking up the wrong tree. This point usually lies at the mid-point of the 3d wave. Whatever approach one prefers, all hell should break lose at about $34. Add it all up one should look for a target between $20 and $10 and a time of arrival between early 2013 and 2014

For those that are interested, it is possible to scroll down two blogs and enlarge the chart of the TSX60 Capped index. It can then be dragged up (takes a little dexterity) and then put next to this chart when that too is enlarged. After playing around with those two charts for a little while one is tempted to conclude that Canada too is an emerging market, or alternatively and more kindly, that the world has become one.