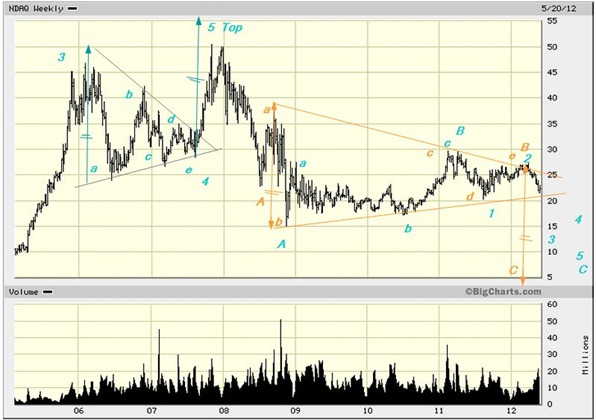 This is the Nasdaq Exchange. Lately they have been accused, among many others, of bungling the Facebook IPO. The top for this stock (and most other exchanges) was back in 2007. To date it has retraced just 42% and appears to be ready to go down again. The pattern is a  simple A-B-C (in blue) or a little more complicated one with a triangle in the B-wave position. Either way the stock should go down further, perhaps even to about $5. If that sounds a tad extreme, have a quick peek at the Deutsche Börse (Frankfurt); 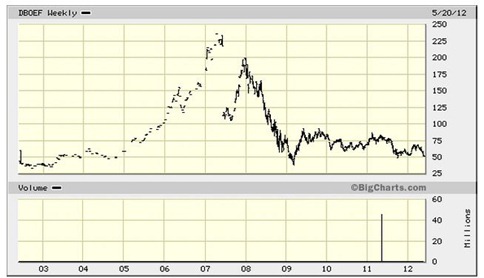 Despite the fact that the DAX retraced much of their losses from the Great Recession , this exchange is still only trading at 1/5 of its peak value. On a comparative basis that would put the NDAQ at $10.

The big exception to this theme is. of course, our own X, TMX group or Toronto Exchange. Caught up in the bidding war the stock has been suspended in thin air for the last year. 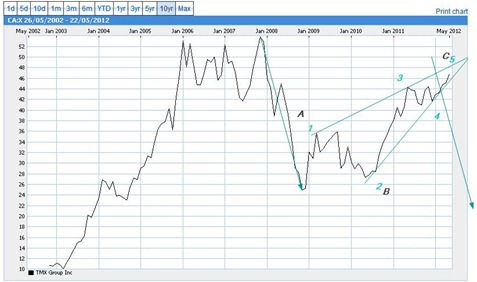 We would have sold it quite a while ago and would still do so today. It is not yet clear that the deal will pas scrutiny with the two dozen or so agencies, committees and so on that have a say in the matter. Should the deal pass, then at least the stock will cease to exist, a fate it would then share with a whole slew of other companies that did not consider the unintended consequences of demutualization . If it does not pass the stock will probable crater and join the other exchanges at the bottom of the charts instead of the top.