Like Discount Corp. (now defunct) Morgan Stanley was created as a means to circumvent Glass-Stegall. It is a spin-off of JP Morgan. Now, of course, it is legally also a bank but  no doubt that can be changed back with the same speed as it was done in 2009. Apart from GS this is the only other remaining big gambling casino, but without the bad reputation or the over-sized rolodex. Here are the charts; 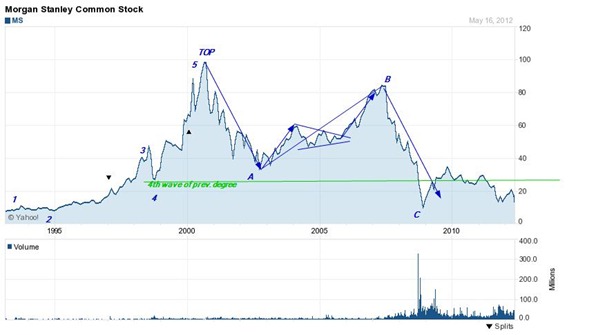 This is a little different from the last blog. With all due respect to the Gainesville gang, it would seem to me that this chart looks a lot like GE and that it is conceivable that MS has done the entire correction! Alternatively, as shown before and in the chart below, we are still in some 5th wave, in fact the 5th of the 5th. The large A-B-C down is almost perfect, starting at about $100 and going to $10. The pattern is very symmetric. 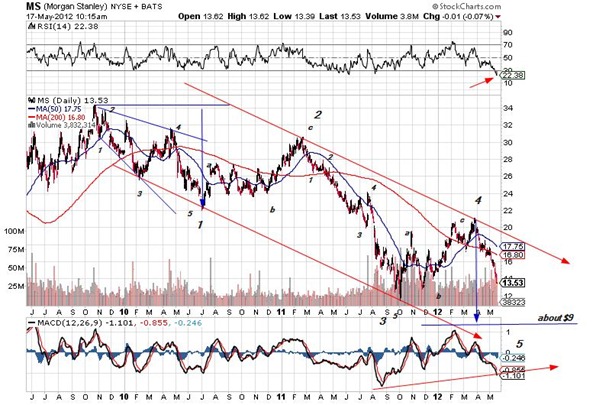 Supposing we are in a 5th of some sort, waves 1 and 5 would be equal at about $9, just $3/$4 from where we are now. (probable 3 of 5 of 5). The stock trades at a p/e of 20 but that is meaningless. We caught the $11 to $21 move correctly but did not execute well. This time there is a chance of doing both. For the moment this should be a buy at $9 for sure but for the more courageous perhaps already, if, for instance, this is a b-wave almost complete. Perhaps, once again, their will be a stream of talent flowing from JPM to MS. The RSI and MACD certainly suggest a change is in the air. Below is that comparison in a chart, MS in green and GE in blue. 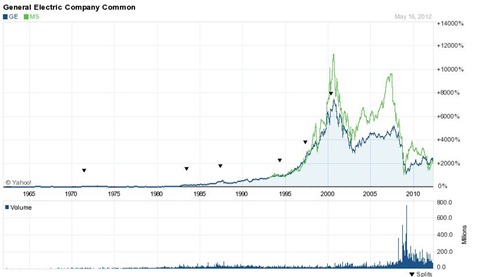 Click on the chart to enlarge, one dropped from 100 to 10, the other from 60 to 6. MS is more volatile as would be expected when compared to industrial turbines and so on, but by and large, the correlation is inescapable.