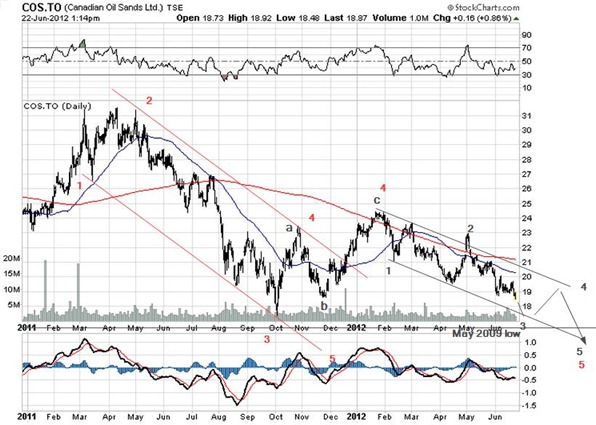 Back in October of last year with the stock close to $17, we expected a rebound to $24 and then down again. That is exactly what we got except that it took a lot longer. That would still put us in wave 5 right now but it should make a new low, below $17 at the very least. To gain time we are assuming that wave 2 of this 5th wave is a running correction and as a result we are still is wave 3 with 4 and 5 to go which could easily get us to the target.

Oil recently got to about $78 a barrel, this is getting critically close to where the oil sands are commercially viable (about $65???). If oil were to drop below that level for an extended period of time the stranded costs could literally kill some of the operators (by the way, China is in this game for $14 bln. or so). There are already problems with getting the pipelines built, which are critical for getting the stuff to where it can be used. There is already talk about the US becoming self-sufficient ( by using gas etc.), but the biggest event is the economy. If it tanks. so will oil and the oil-sands may not be viable for another 20-30 years. Time will tell but the stage is definitely set.