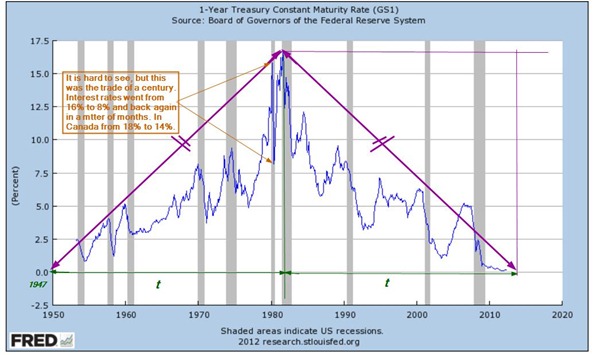 This is the one year T-bill rate in the US, courtesy St. Louis Fed. In a previous blog (March 19, 2012) I had commented how, frequently, markets have a predilection for symmetry, perhaps it strokes our sense of aesthetics the right way, whatever.   In this chart I have endeavoured to “show” what symmetry would imply, and remember a picture is worth a thousand words.

We know that interest rates hit a low immediately after WW2, I believe in 1947. This chart does not go back quite that far but it is easy to imagine where that point is. The two, thick purple lines are drawn vector equal but opposite in direction. What it tells us is that rates are about to reverse any time now, probable before this year is out. This is not that big an insight as you cannot really go below zero, not if you are running trillion dollar deficits year after year.

What may not be that obvious is that market action near peaks or lows can become decidedly unnerving. During 1980 US rates went up and down by about 8% in a matter of months. Jimmy Carter was president and we had the Iranian hostage crises that occupied most of the news. There was talk about limiting the use of credit cards etc.etc. It was great for traders if you got it right (I did for the most part for my bank Conti. Ill.) but no fun if you did not. Carter did not get re-elected  and the hostages were released the day after Ronald Reagan became president.