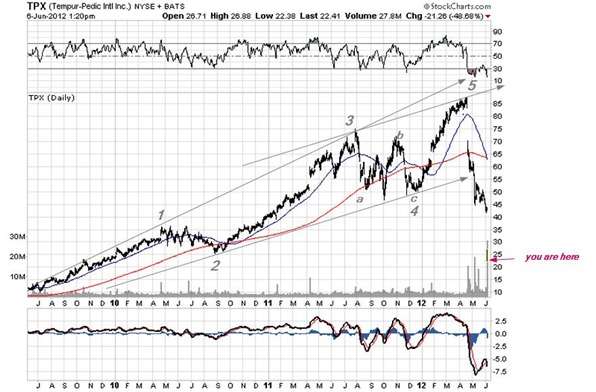 These guys make memory foam mattresses. High tech stuff supposedly invented by NASA. They announced ……Tempur-Pedic, which sells higher-priced foam-based and other specialty mattresses, now expects flat sales of about $1.43 billion in 2012, down from its previous forecast of $1.6 billion to $1.65 billion.  ……….

Sounds pretty innocent but look at the stock. The initial drop was entirely predictable to about $45, the rest was not and certainly not the speed at which this happened. Slightly more than 10% of the stock was held by shorts and it is doubtful that they covered their positions entirely. An abrupt bounce is a good possibility, either from here or a few dollars lower just in case we are in a 4th wave. This is the kind of trade you would prefer to do with “other-peoples-money”. But the stock is oversold according to the RSI so this might actually be a golden opportunity.