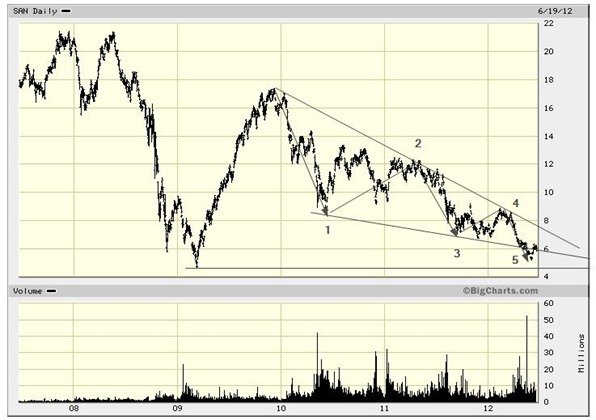 The assumption that Santander traced out a large diagonal (see previous blogs) remains plausible but there are a few caveats. The “wedge”has a failure built into it which is never a good thing. This does not show up in the more time-compressed previous chart. Fundamentally it is nice that the banks got a 100 bln. Euro support package but most estimates are for at least 350 to 400 bln in order to solve the problem. Is round two going to come with the same lenient terms? Is the subordination of other creditors going to undermine the situation? From an EW perspective we would have liked to see a drop to $4 or below. When something does not happen it is often simple delayed. After all we could be in wave 4 and 5 is still to come. Continue to hold but with a tight stop and exit at the trend-line, say at about $7.