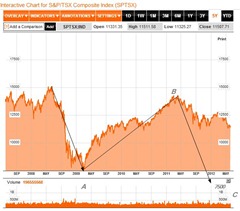 Un till there is a convincing argument to expect otherwise we will stick to the basic EW model A-B-C correction. The target is about 7500 and perhaps a lot lower. When is hard to say but it is obviously a function of the forces that are working against this happening. These take time to exhaust themselves. Amusing things happen in the mean time. Who would have thought that the Americans would blame the Europeans for the most recent problems, conveniently forgetting that their economic situation is about twice as bad (at least in terms of debt). It is unreasonable to expect the Greeks and Germans to fall in love all of a sudden, but the chances of the Republicans and Democrats agreeing on taxation being part of civilization is even more remote, despite three years now with above a trillion deficits. Anyway the best guess would be between now and 2016. How is easier, see below;

This is just a tentative picture. C waves are always 5-wave structures and should develop more or less along the above path. It may not be Europe in the end, perhaps it will be the USA. Elections are only a few months away and the “back-burner” status that the US has enjoyed while Europe blows up, may soon be over.