We have never been all too fond of this company and became downright negative after RBC put it on its focus list quite some time ago. Here is why; 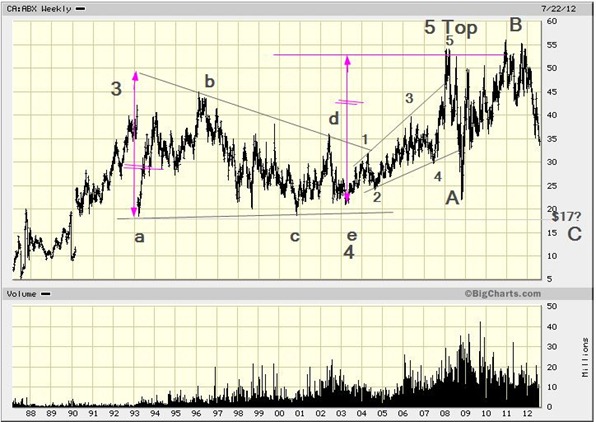 For a number of years during the late eighties this stock, and also Franco Nevada to mention but one other, was the darling of gold speculators expecting a repeat of the metals performance from roughly 1973 to 1981. Instead they got one of the best formed triangles ever, lasting a little over ten years, (I was focused on Hecla and never looked at ABX).

Triangles occur one leg before the last, which is , of course wave 4. The somewhat violent jump up is called a thrust. Typically it has an amplitude roughly equal (or 1.62X) to the mouth of the triangle, shown here in purple. It is a 5th impulse wave and as such should subdivide into 5 waves. It shows overlap but that is OK as it is a “diagonal” with a nice throw-over at the end. The A makes it right to the lowest level of the e-wave. The B-wave makes a new high and now the C is on its way down to about $17. Here is an old chart from Jan. 2011 showing the B-wave in detail and a chart of what to expect as of today. 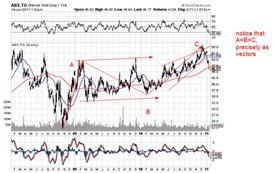 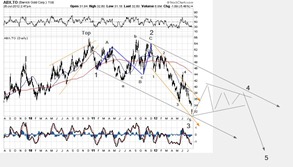 Notice (click to enlarge) that the B-wave is also perfectly formed. After the top we get a rather messy 1-2 that consumes an entire year without going anywhere. Then wave 3 of C which took us to the low of $31.18, almost a drop of 50% just in the third wave, money you could have saved reading previous blogs. A pretty good rebound should now follow for wave 4 and it could again take a whole year! It cannot trade above $46 for this scenario to stay valid. $42 is a better guess for the rebound. After that wave 5 will take the stock to around $17 or so. What a hedge!

PS. Wave 2 is messy, I have used blue to show the composition. It is irregular and consequently I would expect wave 4 to be a sideways “flat” or again a “triangle”.