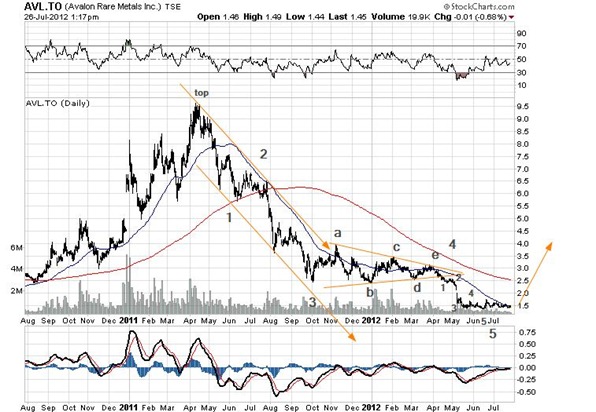 There seems to be some misunderstanding as to where the triangle actually is. It is not somewhere in the bottom that we have been scratching for the past three months or so. It is the pattern that took seven months to form and that fluctuates between a high of $4 and a low of about $2.35. It  measures about 3.5 blocks or $1.75 which is roughly the distance in the minor 5th wave thrust. Nearly always, after the thrust, the stock reverses at least to the level of the top of e ($3), but equally often all the way to the highest point in the triangle, in this case $4.  These are minimum values as obviously a new bull market could take the stock much higher. By the way, there is no credible alternative. If one were to assume that this was not a 4th wave triangle but a b-wave triangle, then the stock would have to trade with a negative value!, accordingly that is not possible.