The nice thing about keeping a blog is that there is a record of your comments, it actually measures or records the precise words and not how you remember them. The more often I read old blogs the more amazed I am how accurate EW can be, of course I have a choice which ones to “update”. This time it is Cott. It was once the darling of the stock exchange, as well as being involved in accounting scandals etc. Three years ago we put this out; 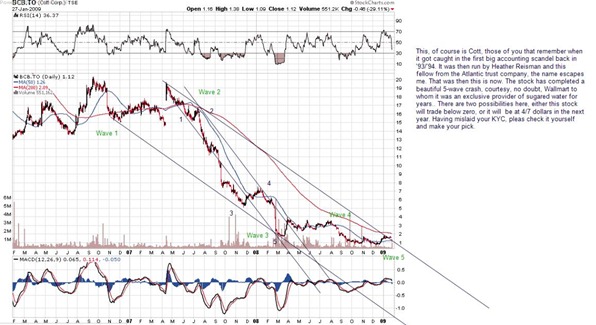 The blog is still there. The idea then was that a clean 5-wave down was complete. Ergo at least a rebound was due (unless the stock cratered) to about $4 to $7. So what happened?; 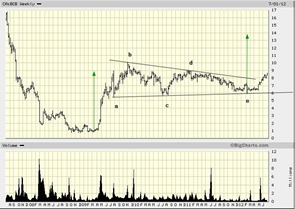 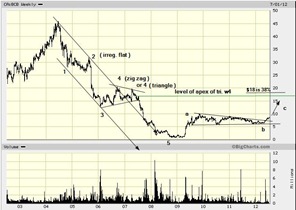 Well it shot up to $9 (even $10) and is still almost at $9 three years later. That is a nine bagger right there!By the way, keep in mind that the old chart is only the 5th wave, from $20 down, not from $45! From here it is reasonable to expect this stock to climb to about $14 if c=a in a rebound correction from the lows. Higher levels, $18 for a 38% retracement or the level of the apex of a triangle are also very reasonable. That all this is “reasonable” becomes clear when you look at the big picture; 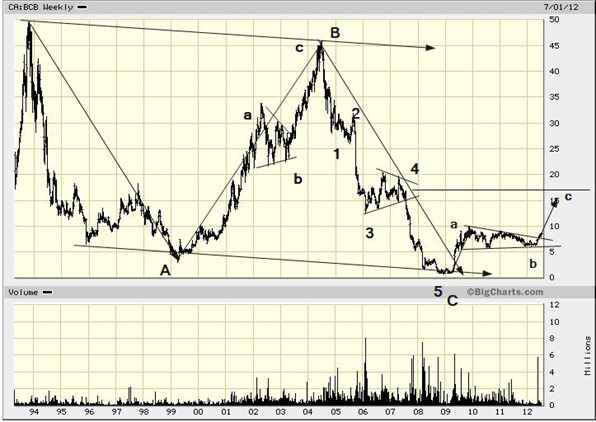 The top for this stock was actually in 1993, accounting irregularities were alleged to have occurred earlier. This whole structure is a very good example of a large, flat with all three waves approximately equal. The arrows are drawn schematically and run perfectly parallel . Note that over the 16 years that this thing took to complete, the arrow is off by at most 1/2 year and less than 25 cents from the parallel lines. ( For the sake of simplicity I have  started and ended the three legs to fit the geometry, in reality the A wave may have bottomed at the first low.) The present target between $14 and $20 is a bargain compared to KO, Coca Cola, assuming you believe in carbonated sugared water.