BCE almost self-destructed back in the tech crash and of course it’s precocious and better known offspring, Nortel Networks actually did. For the record, I have been wrong on this one never expecting it to get back to the Teachers et. al. $41.60 privatisation bid, which itself resembled the recent Greek tragic saga but this time entirely made-in-Ottawa, with bureaucrats on one side and ex-bureaucrats on the other.

This company, like most Canadian blue chips, owes its existence to the strong belief here in Canada that uncompetitive and therefore safe is the way to go. It is a regional monopoly, together with Telus , Rogers and a few smaller players, each with their own fiefdom. It is not unusual today for a family to pay more for TV, phone and internet than they did 30 years ago on their mortgage! By some estimates rates here are about double what they should be. Also it is no coincidence that the richest man in the world figured this out on the other side of the US.

In EW terms there is an initial drop of 5 waves (?) followed by a long drawn out A-B-C, a correction within a down trend. The correction looks like it could be complete or go on for another year or so but in dollar terms it should not gain much further. In fact, like with Rogers, the peak at $42 may already have occurred about 6 months ago. Time to tune out. 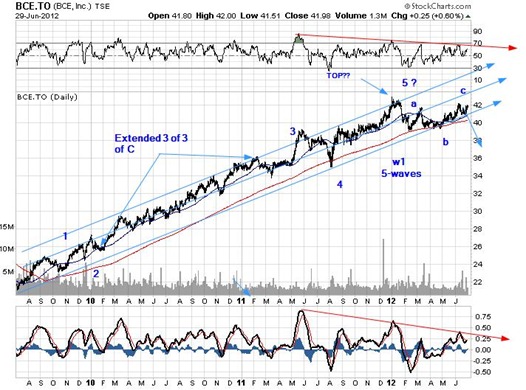 Just like with Telus this C-leg is very suspect. For most of the time the stock has a range of about $2 or 5%, this while the financial system seems to be breaking down for a second time. It is climbing on momentum created by memories of blue chips and a general lack of choices. No broker has ever been sued for buying BCE, an oddity itself considering how ridiculed the stock was. These things go on un till they stop and then there is no support other than the bottom , that is below $18.