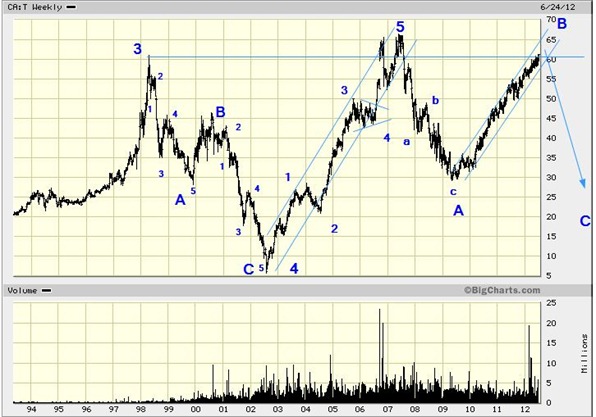 Telus is one of Canada’s few darling telecommunications stocks. Before we have a look at the EW count, what should a prudent investor do using just common sense? Suppose, for the sake of argument, that one could time the market, which we are continuously told you cannot to give weight to the idiotic “buy and hold” approach – you would have made $55+$60+$35+$30 or the sum total of $180 for the last 4 moves. If one could catch just 1/2 of that the result would still be a gain of $90, substantially more than by holding for the past 14 years or even 20 years.

Over the past 20 years the stock has only been higher for perhaps 3/4 of a year. Obviously that does not change the chances of the stock going up or down but given the wild swings and applying that very sensible “a bird in the hand” approach it might just be wise to exit. Also, twice is a coincidence, but three times is a pattern! And here we have that pattern, a triple top.

In EW terms, the drop from 98 to 02 is a beautiful, absolutely perfect 5-3-5 zig-zag, which is a complete correction, most probably wave 4 as Telus flirted with bankruptcy. The big move up into a new high would then be wave 5, which wave can be subdivided in 5 separate waves though not necessarily as shown. Then the initial 61% drop is wave A of the next bear. The stock retraces most of that in what must be one of the most “phony” bull moves ever, zero volatility, straight line up for 3 years, see below. That is the characteristic of a B-wave. Next on the menu is wave C of this flat, right back to $30 or lower. In fact much lower as the 4th of previous degree is at $5/6 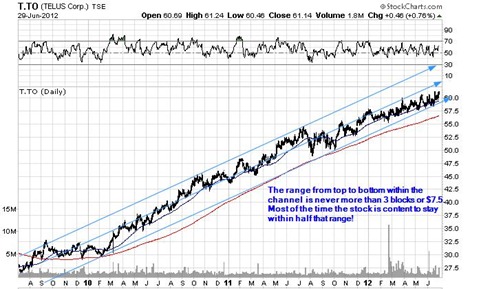