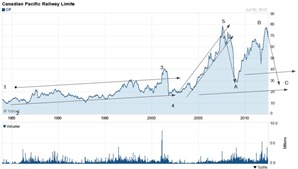 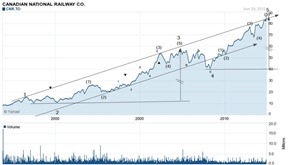 The charts do not have the same time frame! CNR is the larger of the two and the only one with East to West and North to South capabilities. Up to 1995 it was a crown corporation. But it is CP that has adopted the beaver as the animal to emulate for its smarts, engineering capabilities and enormous level of energy, in short all those things that Canadians have in abundance. But  in the opinion of one Mr. Ackman of Pershing Square, a hedge fund, the company has very little of those attributes. So after a few years of yanking at its chain he has managed to crown the ex-CEO of CNR as the new CEO of CP, a fellow by the name of Hunter Harrison , a 67 year old no nonsense American from the South. All this is interesting simple because it is so un-Canadian, otherwise we will not comment on the merits of all this.

However, looking at the charts and adjusting for the time difference, the performance is not that dramatically different as both start between $10 and $20 and move up to $80 to $90. The operating ratio was the tricky part, at which  the beaver consistently underperformed. Lots of excuses from snow to no-snow, from bulk goods to normal freight etc. etc. failed to explain that and ultimately a change at the top  was the only solution. Unfortunately that  will probable do absolutely nothing for the shareholders. CP (see a previous blog) probable topped out months ago while CNR is also ready for a big correction. CP completed a B-wave while all this was happening and CNR a 5th wave. Both could lose about $50 in the next few years. In detail; 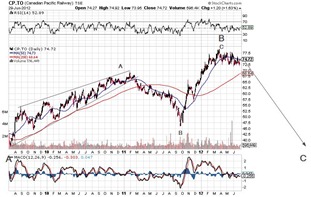 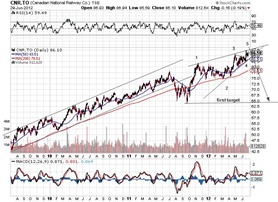 CP had a nice run-up  as all this was going on and perhaps all the good things coming from this, supposing there are some, are already discounted in the stock. This one looks like it will turn out to be a buy on rumour, sell on fact situation regardless of whether or not there will be a fact other than this recent CEO appointment.

By the way, if you look closely at the channel drawn in the big Yahoo chart of CP, you will notice that the above expectation would be fulfilled just by regression (reversion) to the mean – often referred to as the surest rule in the stock market – , at about the mid-point of that channel. Nothing really to write home about.