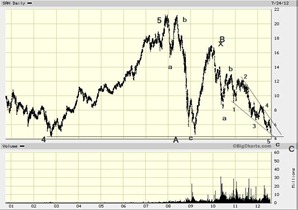 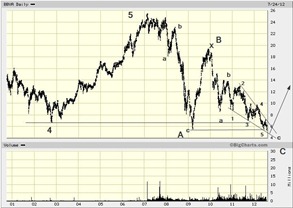 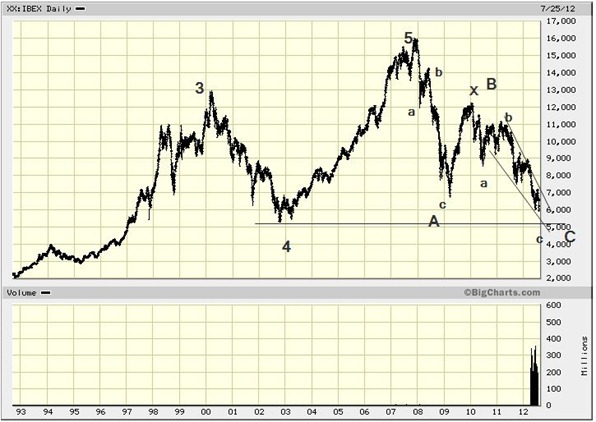 Santander, Viscaya and the Madrid index are all at , close to, or even a little beyond what are “normal” reasonable targets under EW. The index could still do another 700 points or so to reach the 4th wave of previous degree but it has already lost precisely 62% of its value. Santander has maybe another 60 cents to go to get to the 02 lows, the 4th wave. Viscaya has done all that and is now pennies away from the trend line of the wedge wave c of C.

What one would expect in EW land is a turnaround somewhere here, if not for the IBEX as a whole then certainly for these two banks. To state the obvious , there is only another $4 left to the down side. Keep in mind also that Santander is the largest bank in the Eurozone and Viscaya is not that far behind. Both have extensive operations outside of Spain itself. If ever there were banks that fall into the “systemic”-risk category, it is these. Who knows, maybe just somehow they will pull another, bigger, rabbit out of the hat. If they are buys remains to be seen, time will tell etc. But in any event these banks are not good shorts.

Here they are in more detail: 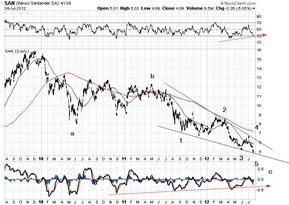 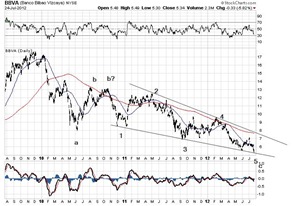 In the SAN case it is possible to draw the wedge less sharply which would change the count in such a way that we have only completed wave 3 and are now starting wave 4, that does not apply to BBVA at all. The RSI and MACD are not confirming the new lows.