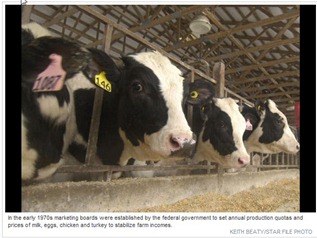 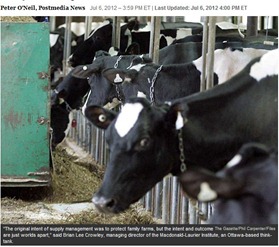 Farmers are the politicians greatest supporters, provided they get what they want. The simple way it works is you vote for me, and I will give you a monopoly. The system keeps on giving un till it hits a brick wall.  Apparently many recipients are no longer small farmers but big biz. We are good at it in Canada, we have it for milk, beef, poultry, potash mining, grain transportation,communications and banking, just to mention a few. We are not the only ones, The US is big at this through subsidies, a slightly different approach with the same result. Europe, once upon a time, had its “butter mountain” and certainly the idea has not been abandoned entirely. New Zeeland seems to be the only bright star in the firmament; they went capitalist overnight.

It is no different when Central Bankers practise supply management when they set interest rates far away from equilibrium levels, it hurts certain groups and favours others all on an arbitrary, frivolous and capricious basis. Keep an eye on this politically hot potato, it may shed some light on the future of Central Banking.