Ivanhoe shareholders approved changing the company’s name to Turquoise Hill Resources Ltd. The new name is anticipated to become effective on or about August 1, 2012. The company’s new trading symbol on the Toronto Stock Exchange, the New York Stock Exchange and the NASDAQ Stock Market will be TRQ and is anticipated to take effect on or about August 6, 2012.

Juliet:
"What’s in a name? That which we call a rose
By any other name would smell as sweet."

How you go from a character out one of Sir Walter Scott’s romantic books to Turquoise Hill  Resources is not immediately clear. What is clear, and the tragic ending of Shakespeare’s play makes that rather obvious, is that a name is everything and changing it deliberately expresses a desire to part from the past or to embark on a new future. Arthur Anderson did that when they formed Accenture, stating quite clearly that A new name, meant a new direction. Countries do it when they want to cast off the colonial past, Rhodesia, named after an English scoundrel, changed to Zimbabwe leaving my dogs in limbo. Burma and Ceylon are now Myanmar and Sri Lanka and so on. In short the name and or brand is everything, you only change it if you have to and when you do, change is in the air. We are getting close. 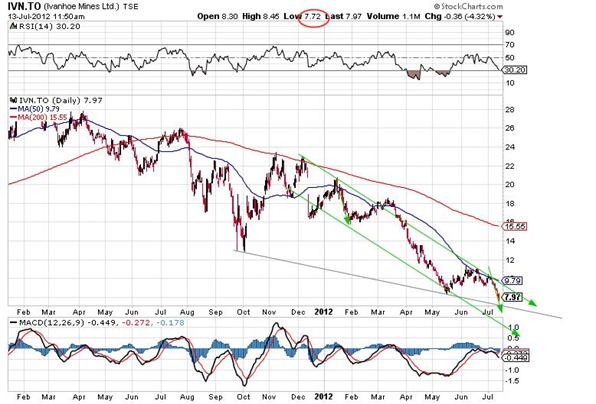 Do we need to wait for August 1? That is now the question.