Dead wrong on this one. Last bit of regulatory approval was given by BC and Alberta the other day, so it is looking like a done deal, valued at $50. Needless to say , I am surprised that this deal is getting the go ahead. In the end the exchange will control some 90% of all trading in stocks in Canada and will, essentially, be owned by the financial industry or ,at least, a good part of it. In any event stockholders should tender their shares as without this bid the stock would probable not be anywhere near these levels. Below are the stocks of a few different exchanges as well as the TMX; 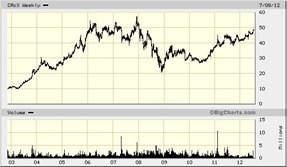 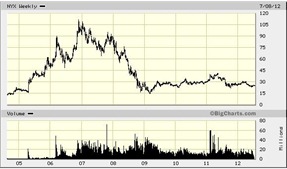 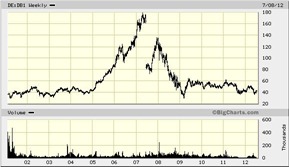 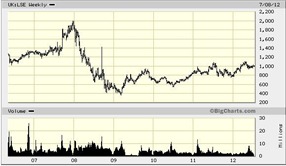 The time frames are not all synchronous but the thrust of the argument, that is that the TMX stands alone, is pretty obvious. The best comparison, arguable would be with the New York stock exchange, but despite initially being reasonable well correlated that came to an abrupt halt in 2009. Clearly all exchanges other than the TMX continue to move more or less in the same direction. Apart from the London Stock Exchange all are close to the lows of the Great Recession. The TMX is close to the highs reached before that. Why? Are there monopoly rents waiting to be harvested?

A good example might be the Canadian Securities Institute, which used to be part of the regulatory environment. Back in 1992 the CSC, Can. Sec. Course, the exam required among others to qualify to become a broker, cost $400. Now, 20 years later, the same course costs $1280. In the mean time, of course, ownership changed to private, very commercial, hands.