The usual “then” and “now” charts; 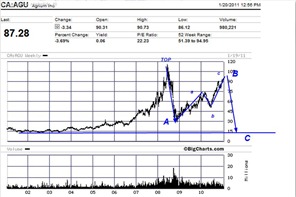 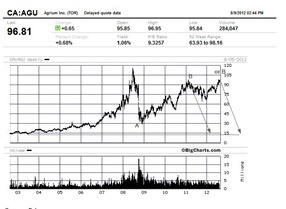 On the left what we expected a year and a half ago. It did not happen that way. The stock did in fact peak at the about $95 level AND pretty well in the indicated time-frame. Furthermore it actually drops about $20, but then it miraculously recovers from the Oct. lows and is now trading essentially where it was then. We would , of course, blame the QE3 or operation twist etc. for this waste of time, others would applaud the intervention. In EW terms the anticipated B wave basically morphed from a simple a-b-c to a double zig-zag or an a-b-c X a-b-c. We could go a little higher but considering the proximity of double topping, don’t bet on it. Potash never had this time extension!, see the 10 preceding blogs under POT and the chart below; 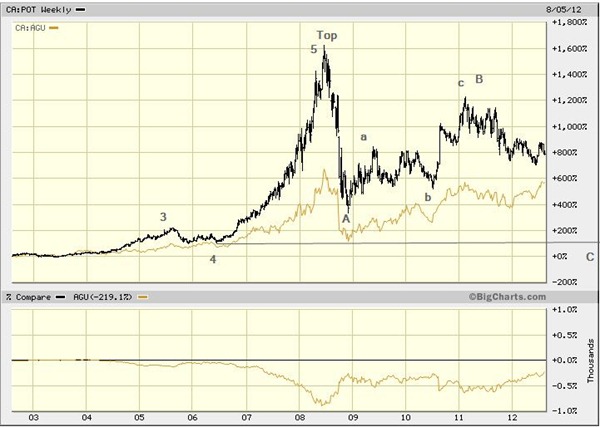 Now some quasi-analysts are recommending AGU, particularly now that we are experiencing a crop killing drought in the US. This is a rather over-simplistic take on the matter. Potash does not create water in the soil, it is simple a mineral required for the proper growth of the crop. In the process the plant absorbs the mineral and a good part is removed at harvest. However, if there is a major crop failure, especially one where the crop is simple ploughed under, the nutrients stay in the soil and can be used for the next crop. Also farmers are rather straightforward in their approach, if they have money they buy, if they don’t, they don’t. So for the immediate future, the drought situation does not help at all!

Corn or maize is often cited as the potash-selling-crop du jour. The price will keep going up for years to come and potash will almost walk out of the warehouses by itself, at ever higher prices. There is a problem with this view which becomes evident as soon as you look at a longer-term chart of corn. They are hard to find so most cannot be bothered, but here is one from sharelynx ; 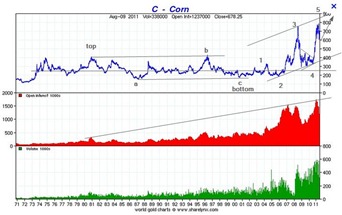 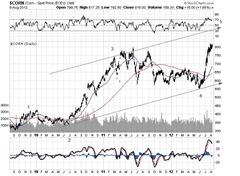 It does not run to today so I have added the usual Sharpchart that is as of this moment. It suggests that a high of $900 is possible, probable in the very near future, which would be consistent with the long-term chart. The interesting thing is that corn only broke out of a range in which it had been from about 1973 to 2008, or roughly 35 years. To assume now that since it has more than tripled from an average of about 250 to the present price of 800, all in 4 years, it will continue this climb straight up is ridiculous. Statistically speaking , chances are much greater that the price will drop back. If the indicated count is correct it will. A look at the stuff itself, that is potash tells a similar story; 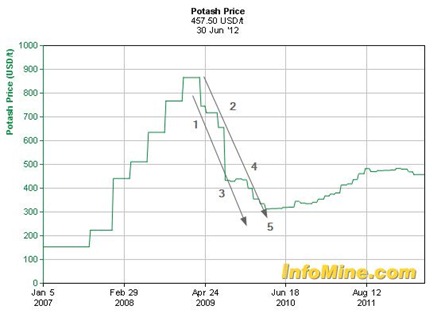 The drop from the peak near $900 is an unmistakeable 5-wave sequence, indicating that the trend is now down. So far it has barely managed to retrace more than about 30% of the drop. With the stuff trading at about one half of what it traded at near the peak,  it is difficult to justify a stock price for AGU that is within 10% of its all time peak. Remain bearish.