This market is thoroughly beginning to irritate me a lot. So I am contemplating a silent period for a few weeks. However, before doing that I just would like to present the bear case , in my view the realistic case, once again using the DOW. I single out the DOW as it seems to be the only major exchange that is so close to its previous peak(s), perhaps because it is easily manipulated by a constant barrage of talking up, interventions by plunge protections teams and what not. Here are the charts once again, arithmetic and semi–log; 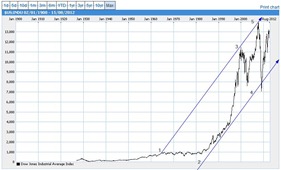 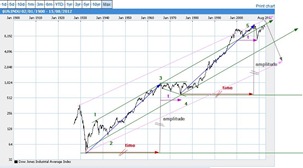 These charts are from MSN and include the Great Depression. They can be enlarged by simple clicking on them. The counts shown differs a bit from the one the Gainesville boys swear by. They have the top in 2000 whereas, chart wise at least, 2007 seems to make more sense. It is all a little academic but take a good look at the semi-log chart. Equal distances are proportionally equal so if the great recession we are supposedly in is going to resemble the great depression you would expect a drop of about 3 blocks, so far we have barely done a single one. Notice also that in both waves 2 and 4 the DOW travels from one side of the channel to the other (irrespective of the absolute size of the loss). This time the DOW barely made it to the middle and is once again hugging the upper channel line from below. Given all the supposed excesses the economy has to purge itself of, it would seem reasonable to expect a visit to the other side of the channel before all is said and done.

The 2007 high is interesting for other reasons as well. Waves 1 and 3 combined took exactly as long as wave 5 alone AND travelled a (proportionate) equal distance. They are therefore precisely vector equal and I do mean precisely!

Concerning the need for Keynesian stimulus one has to keep in mind that his theories are unproven, certainly in settings other than the one he had in mind concocting this stuff. But even if his thoughts are taken as gospel it is worth remembering that;

a. Taxes in the US have never been lowered/extended as much as they have been over the past, say, 10 years.

b. The US has run a deficit of about 6 trillion during that same time period.

c. It was involved in at least one war if not two for most of that time.

d. The Fed’s balance sheet has exploded by an additional 2+ trillion dollars.

e.The US is undoubtedly the greatest beneficiary of seigniorage ever and also benefits from credit extended to it by the likes of Japan and China.

f.Apart from bailouts the unemployment insurance benefits were extended to 2 years and now more people are filing for disability that are finding work.

g. For businesses there is the 100% first year depreciation.

h.Interest rates have been near zero for almost 15 years

These are just some of the most obvious ones. There are many others and they are coming from all sides, China, Britain , Europe and so on. What more Keynes do we need???? To make a long story short I am convinced that the bear scenario is much more realistic than the bull scenario.