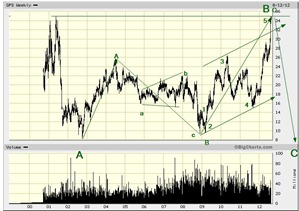 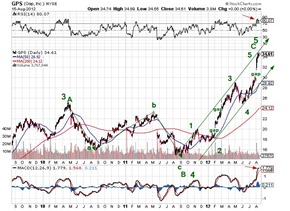 Perhaps this stock will go to $100 or higher, but if you are a prudent investor you would sell now. Here are a few good reasons;

b.The stock just double topped, or is about to do so. This level serves as a magnet but once it is reached it often exhausts the stamina. It is almost always a good idea to stand aside at such a point.

c. From the lows of 2002 the stock has traced out a ten year long A-B-C, a corrective move that signals that the main trend is still down and should, some day, result in a new low. This is true even if the stock exceeds the high of 2001. The large B-wave would simple become irregular which is fairly common in a “flat”.

d. The last leg up from the, give or take, $15 low, comes after a very clear a-b-c (wave 4) and subdivides , equally clearly in 5 waves. The next move, should therefore be a drop to at least $25 (4th wave of previous degree AND a 50% retracement of last years action.

f. The stock is trading about $10 above it’s 200-day moving average, a gap not seen for a long time.

g. Sales, to focus on one metric only, increased by about 5% overall y.o.y which hardly warrants a doubling in the stock price. Neither does the recent increase in the dividend.

For about $3.70 you can buy an at-the-money ($35 strike) put option going out to March 2013. Given the volatility of this stock chances are that you would do well either as a hedge or an outright short.