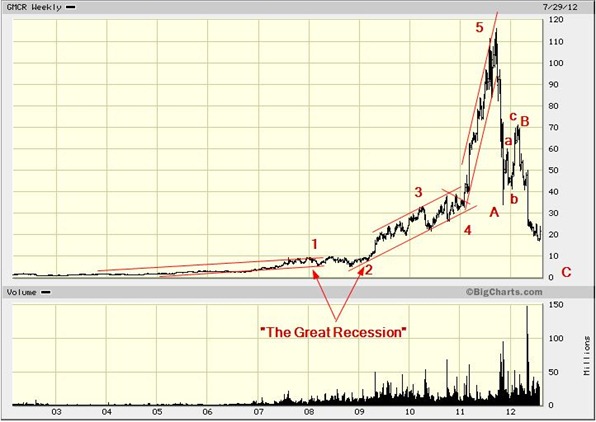 Through an acquisition of “Keurig” in 2006 this company effectively got a stranglehold on the single cup coffee brewing distribution system. The patents related to the K-cup system run out soon and this caught the attention of David Einhorn, a prominent hedge fund guy. Margin calls against the founder and other company heavyweights followed and here we are  at $22, not $115. Interestingly the “great recession” barely made a dent in this stocks progression, proving once again that you can open the monetary floodgates but you cannot control where the water will flow. By the way, “Keurig” in Dutch means exquisite, meticulous, perfect etc. and that describes the marketing niche that this company, or it’s founder created and capitalized on very well. In a way it is comparable to Krispie Kreme Dougnuts , KKD. Both are shown below on a semi-log scale; 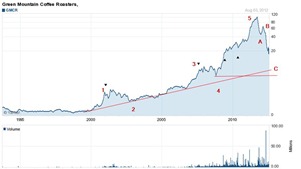 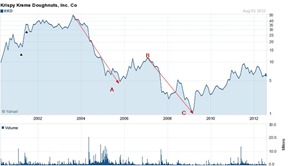 Notice that the count on this semi-log scale chart is different from the one above as it puts the 4th wave on the way up at under $10 instead of around $20 to $30. No idea which is correct but in any event KKD goes from $50 to $1, so if GMCR does anything like that it could ultimately get to a little under $3. The irony is that much of the margin calls are allegedly related to a sizeable position by the founder of GMCR in the KKD stock. Birds of a feather, do flock together! Looking at it in more detail: 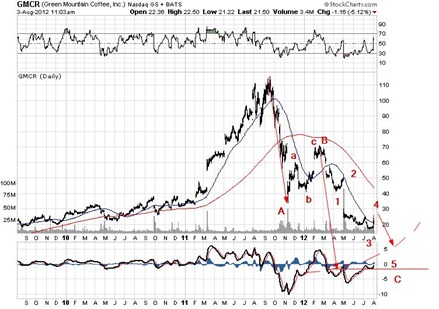 It would appear that the C leg of the A-B-C is incomplete, still requiring a 5th wave down. Presumable, if it does that it could enjoy an exquisite bounce like KKD has had.

Comparable branding was done by Melitta, now more than 100 years old. As a private company no stock comparisons are available.