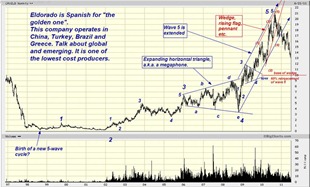 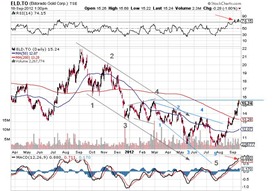 Eldorado is another gold stock that we have commented on before and had completely forgotten. We singled out $10 as the ideal first target for this stock for the simple reason that it represented the base of a very clear wedge into the highs. The stock did exactly that and has been rebounding for quite a while. The nice thing is that the drop from $22 is a 5-wave sequence, clear as a bell and having an expanding wedge for wave 5. It has just retraced all of that 5th wave as is to be expected. In the mean time both the RSI and the MACD are at nose bleed levels indicating a turn soon. The stock has retraced about 50% of the fall and could do a little more (to $17 maybe??) , but once done the drop should resume with at least another 5 wave sequence. If the second leg is equal to the first it would target $5, very close to the low point of the expanding triangle wave 4 of previous degree. By the way, this is a very low cost producer!!