All the big stocks like Walmart, Exxon, IBM etc. have outperformed the index this year, GE included. Earlier (see blogs) we advanced the notion that GE might actually be so much out of phase with the market overall that it is, perhaps, in a new bull market. After all $5 or so seems low enough. Here is the chart again; 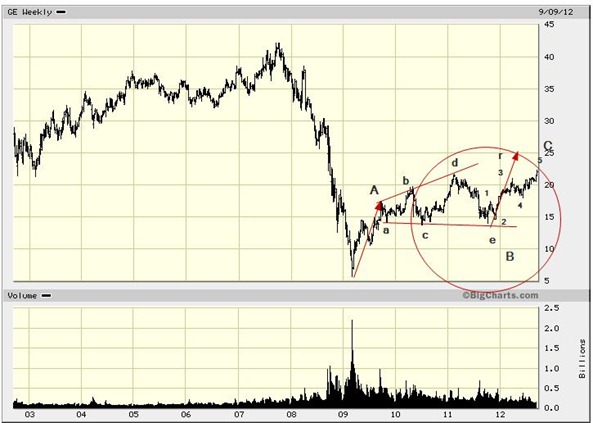 At $23 GE will have retraced 1/2 of the recent drop from $42 (it was once at $60!). The problem with the bull case is that there is no impulse wave up at all, although, I guess, you could stretch things a little and argue that we are presently in a wave 3 or even 5 of a first impulse wave. Not very convincing. A much better interpretation by far would be that the entire move from the low is actually “corrective”, that is counter-trend. The pattern would be an A-B-C with the B as an expanding triangle, treading water for 2 whole years. If the C is to be vector equal with the A, a very common event, it should unfold in 5 waves and end on the circle where it is now. Some are inclined to call the moves from b on the jaws of death. As noted elsewhere this pattern does not exist in EW-land and it has a little too dramatic ring to it. Here at least, it may be conveying the right message.