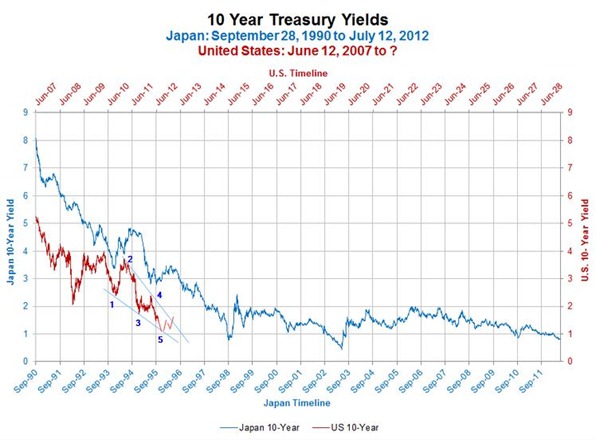 This is a great chart, unfortunately I cannot find the source but you can get the charts separately from St. Louis Fed and the Japanese Treasury Department. I have added the last few weeks!     Since the announcement of the 40 bln. / month purchase of mortgage backed securities for an unlimited period in the future, interest rates have actually moved up, but so far at least not in a meaningful way. In the mean time Japan has joined the group of Central Bankers by announcing another 10 trillion yen of bond buying ( about 125 bln. US, bringing total to 700 bln.) Other Central banks have simple lowered the fraction in fractional-reserve banking or, as in the case of China, gone straight for infrastructure improvement programs.

Japan is not America, that much we do know. The yen is not a reserve currency and Japan holds about a trillion US dollars as reserves. China another two trillion. So the US is beholding to its creditors, for Japan this is mostly an internal matter. Japan has an aging population and is not keen on immigration. The US has a much younger generation but is nevertheless not that keen on immigration anymore either! Japan has a collective mindset, the US for the most part subscribes to Ayn Rand type of raw capitalism. I don’t think any of this really matters, what does is that Japan embarked on a easy money policy years ago and its stock market is still down 75% and real estate about 80%. If the US follows this example we would have another 14 years to go, that is to 2027, give or take a year. The assumption seems to be that the Fed. can do what it wants but perhaps this will prove to be incorrect. 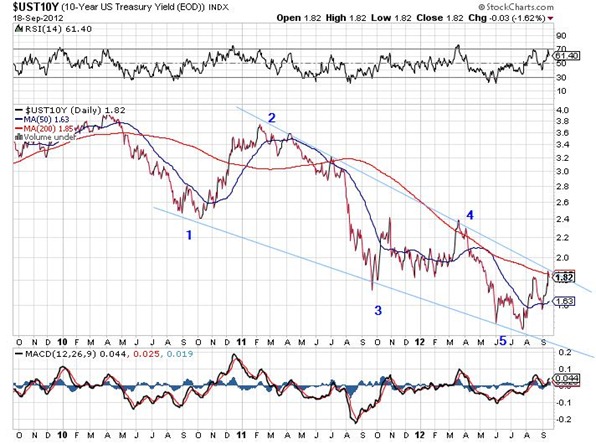 The US 10 year bond on this log-scale chart,  could have made a nice wedge which could be complete. If it is it should break the upper trend-line soon. The alternative is that we just completed a 4th wave which would allow for about another 1/2 year of low and lower rates. That is the least likely alternative at this time, preferring the scenario where rates start moving up right away. See our previous blog of June 7, 2012.!. Below is an additional chart of the 10 year constant maturity. From 15+% to about 1.5% 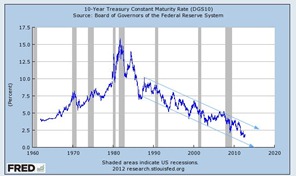