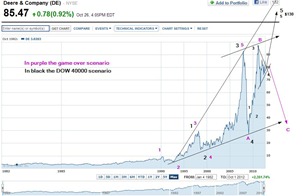 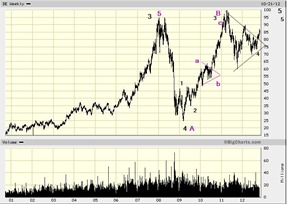 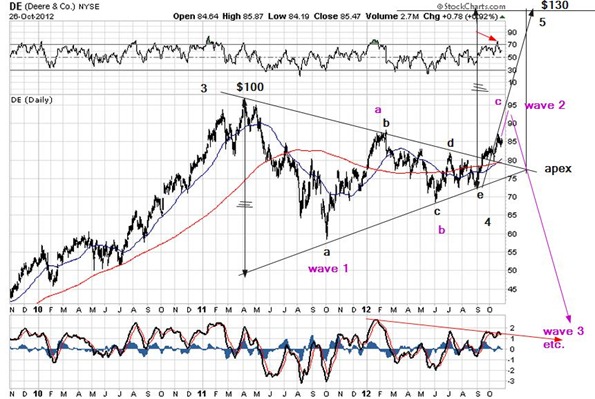 The dumber you are, the better EW works, so I am at a disadvantage. But then I do like to keep an open mind. A few years ago the best performing stock market in the world was that of Zimbabwe, better known to many as Rhodesia. That was, of course, measured in local currency and in nominal terms. I expect deflation first and then inflation so I am not looking for the same thing to happen in the USA right away, but who knows.

Deere has traced a nice triangle, the b, c, d and e are clearly 3 wave structures, but the a could be either a 3 wave or a 5 wave structure. The latter would disqualify the pattern as a triangle, but in the former case (shown in black) the triangle would be valid and would, as always, have to be either a B-wave in an A-B-C, or a 4th wave in a 5 wave sequence. Here, only that would make any sense at all. The stock would then thrust up to about $130.            In the bear case (in purple) we are working on completing a wave 2, a-b-c counter-trend bounce that might go as high as, say $95 before peaking. It is downhill from there.

EW aside, the bear case makes a lot more sense at this time. See also previous comments. The RSI is peaking and the MACD is clearly not confirming. CAT is in the doghouse and expecting lower growth, only CMI, Cummings remains at similar lofty levels.. Overlap between waves 4 and 2 in the big picture make the bull case near impossible!