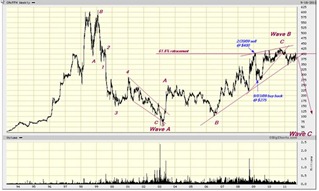 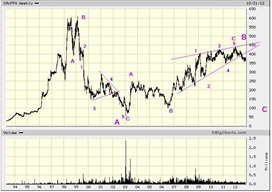 You can click on these charts to enlarge them and push them around for a better comparison. This stock is run by a pretty savvy fellow known for his bearish predilections and his willingness to act on them. That may , in part, explain why the stock is out of phase with the rest of the world and certainly most insurance companies. The range during the great recession from, say , $200 to $400 is but a fraction of the rollercoaster back when we had the tech bubble burst.  Our call, in Sept. of 2011, for a drop in wave C down was obviously premature, in fact the stock managed to go essentially nowhere for another whole year and then some. With the benefit of hindsight and examples set by other stocks (see HON, and the US indices), one has to conclude that the diagonal, that is wedge, was incomplete and counted incorrectly. This is what all these QEs do , they drag out the inevitable much further than one would normally expect.  The C was probable over at the start of this year, followed by a minor degree 1-2 etc.

Ultimately wedges should retrace to there base which in this case is $100.