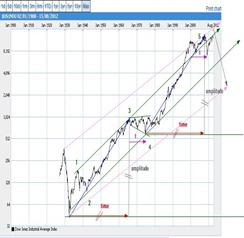 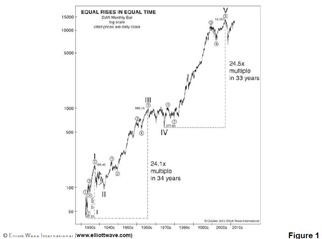 On August 16 of this year I put the chart on the left in a blog, one used primarily to explain how ridiculous Keynesian policies have become. 3 months later the Gainesville boys, in their latest forecast, have the chart on the right as the first picture. They even show the top, just as I do, in 2007, contrary to their contention that 2000 might fit better. I show their chart hoping I am not infringing on their copyrights and that they will not mind. I am very flattered. It is either a case of great minds thinking alike, or, and this is more probable, a case of many roads leading to Rome but only one EW path.

Now that we are on topic here are two more charts; 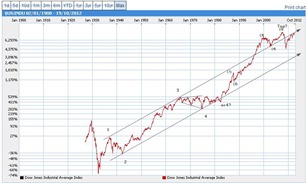 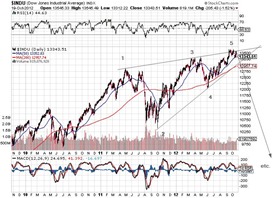 The Dow on the left is no different than the chart above but for greater clarity I show the channel that the Dow has been in since the great depression. The channel is , of course, drawn by connecting the lows of 2 and 4 and then drawing a parallel line through the top of wave one. In this case that line also happens to run through the top of wave 3, and the lows of 2003. Quite amazing actually. On the right is the Dow over the past year or two. The clear wedge here is what matters. The top channel line on the left corresponds with the top line of the wedge. (the angles are different but that is because one chart is semi-log and the other is not). To put it in plain English the Dow (and the S&P and Nasdaq, see previous blogs), have been bumping their heads against the ceiling, 3 times now. Wedges occur in 5th or C waves. In this case it is the c of a large B from the lows of March 2009. Time to reef your sails, better yet get out of the boat.

Normal EW targets would be the top of wave 1 of 5 as wave 5 is extended. That would be where the market was at its high exactly 25 years ago, about 2700. Next is wave 4 of previous degree the top of which is 1000.