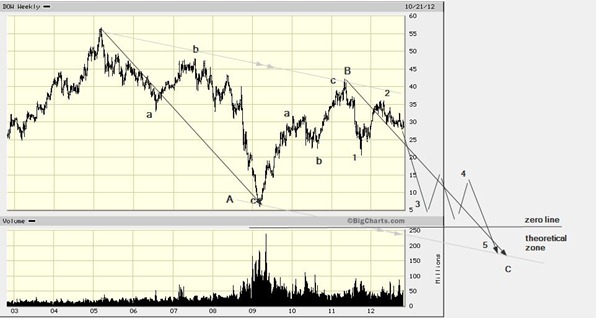 If it pans out is a different matter altogether , but theoretically if Dow Chemical is following the script of a large “flat”, this is what one might expect. In the real world stock prices never go below zero simple because no one would be interested in selling, however conceptually a value below zero is perfectly acceptable in a capital intensive industry such as this. Lets just say that it will reach a value below $5 and above $0.

Late yesterday the company reported a drop in earnings of 39% (nice Fibo # by the way). It was trading at a p/e of about 18. To keep that going the stock would obviously have to shed some $12 or so and even then it won’t be cheap. Betting on this can be a little tricky initially as the market, applying “modern” economics, just loves companies that rid themselves of their workforce, or at least a good part of it. Don’t forget, bad is good!