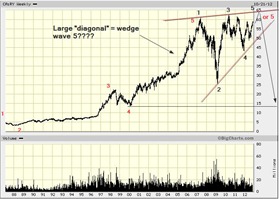 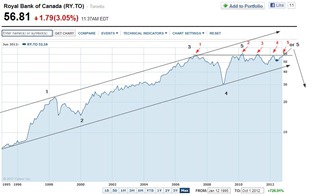 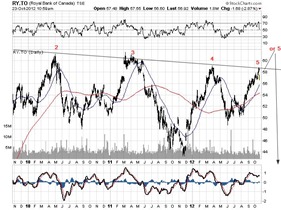 It would seem to us that the Canadian banks now have the wind in their face, in such an overwhelming way that is almost a miracle that they stay suspended at these lofty levels. The obvious reason is , perhaps, that there is literally nowhere else to go. Banks form a large part of the TSX and with the 5 pillars now gone the way of the Do Do bird, the banks, through their investment dealers, are unabashed promoters of their own, or each others, stock. Also, as a result of the 10-fold increase from 2000 to 2007, most ex- and present employees are loath to sell as they would be subject to capital gains taxes and would not be able to collect the same amount in dividends that are in any event quite generous. Essentially they are frozen in (except for some capital gains crystallisations, that can be too complex). In the mean time the banks are spreading their tentacles deeper and wider into the fabric of life in Canada, picking up Ing Bank, one of the few foreign banking operations able to hold its own, Target’s credit card business and now Ally’s (former GMAC car loan business) just to mention a few.

Now if we were to try as hard as we can to find a bullish interpretation for RY stock, it would be that we are in a huge diagonal triangle that still has a little upside left. When looking at the semi-log chart, on the right, the proportions are not all that ridiculous. The diagonal is a structure within which all legs, both up and down, subdivide in three separate legs.It is the only structure that has overlap. Without too much imagination that may indeed be the case. The structure should peak in a few months and should stop at around $64. Paradoxically this positive view now is actually more bearish later as the “logical” target is around $15 when the structure collapses.

Given that there are 5 peaks the stock obviously has a problem breaking out higher. We prefer a count that views the 2nd top as the top of a B-wave followed by a 1-2, 1-2 type of sequence, or , alternatively a slight failure. The target for this is around $25.

Note that the count in the semi-log chart differs from the Bigchart. It would have the actual top in 2010