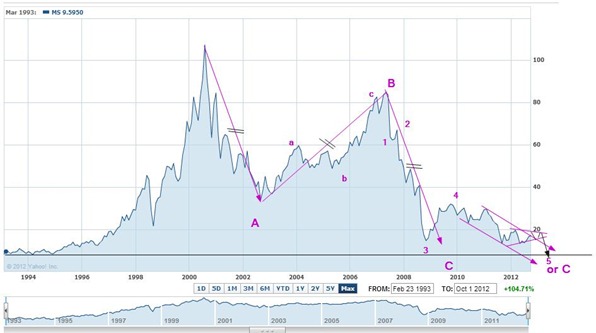 See previous blogs as well. When you look at this Yahoo chart (which because it is monthly, does not always show the extremes properly!) you might be forgiven in believing that the entire correction was complete, in the same way as that might be the case with GE. After all the A-B-C is perfectly formed with all three legs equal. Also the loss from $110 to $6 certainly qualifies as a bear market correction. But the waves are there to fool just about everybody so we are considering the possibility that the C-leg is not yet over. Once or twice now we were very bullish on the stock but missed buying it by a few dollars only to see it almost double. So here is a slightly different take; 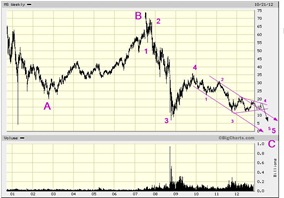 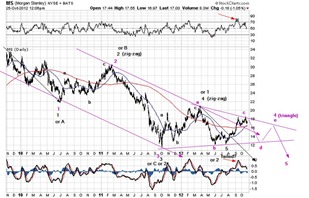 For the sake of the argument we assume that the great recession drop, wave C, was not yet complete. It could simple be 3 waves still requiring a 5th, or alternatively the big B wave was not a b-wave but an X-wave instead, as in a double zig-zag down from the 2000 high. In any event if we are not already in a new bull market the most probable interpretation is that we are working on a triangle. This idea is supported by the fact that if it is not a triangle waves 2 and 4 are both zig-zags and therefore do not alternate ( they do not have to but it is most common). Also a triangle is the pattern par excellence for killing time by breaking the channel and moving sideways. Time will tell but in all cases a buy at around $9/$6 would appear to be a safe bet, if it ever gets there.