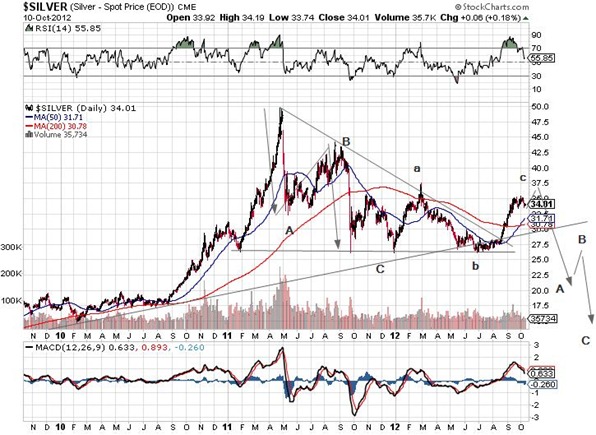 See our blog of a year ago (Sept. 2011). We expected a nice rebound as soon as the C leg was complete. It took 3 months and then the stuff shot up by about 40%, came right back down and then repeated the exercise. What we have now is an A-B-C down followed by an incomplete a-b-c back up.  Some see a triangle here but it would take a lot of imagination even if it met all requirements, which it does not!. Others approach it from the fundamental side. Just heard a young analyst explain that the stuff can only go up given the monetary easing all around the world. Ignorance is indeed bliss. Perhaps he will be right but it did escape him that over the past 3 or 4 years there is no causal correlation at all.

In any event if this is a consolidation period the stuff could shoot up quite nicely. We think it is more likely an A-B-C X A-B-C, also known as a double zig-zag. The little c up may have a little higher to go but than it is downhill again.