This quintessential car epitomizes the difference between a need and a want. You have not made it as long as there is not a matching his & her set of these cars sitting in your driveway. Ergo one would expect this stock to be an almost perfect barometer of of the good and the bad times, at least at those lofty levels where these things are affordable. With  the rise of China, now the biggest consumer of luxury cars, there is no doubt a distortion in the stats, but the principle should nevertheless hold. Here are the charts. 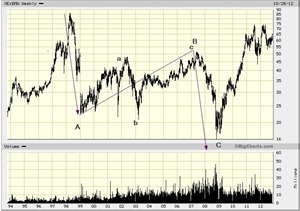 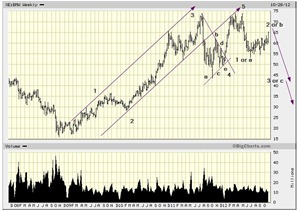 The chart on the left is on a semi-log scale, the one on the right is not. The semi-log scale often “works” better when relatively large moves occur in certain timeframes. Equal distances are proportionately equal. The 10+ year A-B-C with C about equal to A is pretty clear. From $86 t0 $16 is also a respectable bear market. Our guess is that from the $16 level a new bull market started that completed  a first (5-waves) up move completed at the April (or so) double top peak. We are now in the correction, a wave 2. Waves 2 often retrace almost all of wave 1 so the count is not as important as one might think. The stock is ready to fall apart to $43 as a very minimum.

Daimler (Mercedes-Benz) does not show the same kind of pattern which may indicate that this count is incorrect. On the other hand BMW is almost exclusively in the car business whereas Mercedes also makes a host of commercial vehicles and so on. In that sense they are hardly comparable. Here is Daimler AG, not at all clear; 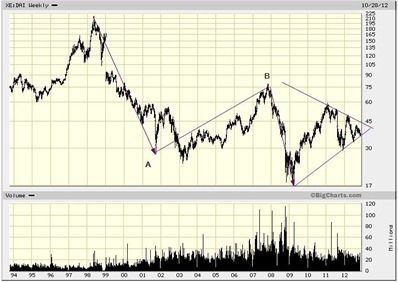