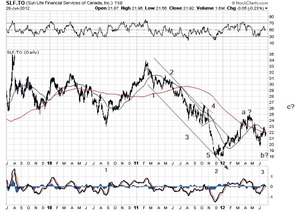 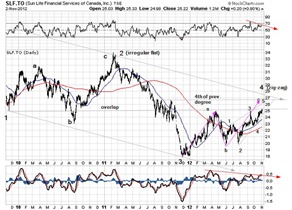 These are the usual then and now pictures. Then was June, now is today, November the 5th. The drop through most of 2011 was such a clear 5-wave sequence that it was relatively easy to predict a rebound to about $25 when the bottom was hit. The ideal target was, of course at about $27 where the 4th of previous degree resides. It did not quite make it which was a concern as it might mean that the rebound would become more complex, it did.

We now have a very nice a-b-c for what is probable wave 4. It should not trade any higher now as overlap would occur. So sell now if you still own it. The RSI and MACD seem to support this view as well. In the big picture we now have; 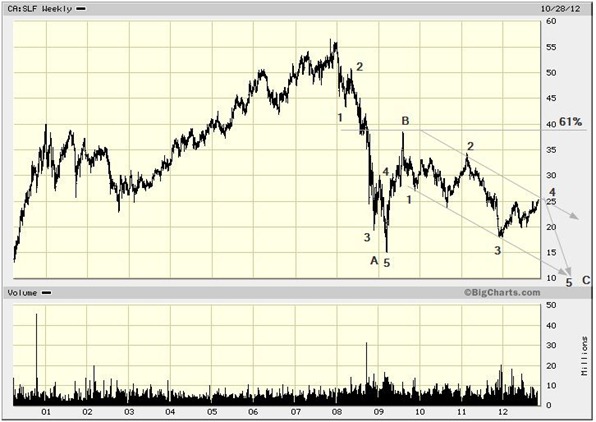 an A-B-C correction from the highs of $56+. The whole thing is a zig-zag, a 5-3-5. The rebound in the middle is an exact 61%. Next we should , over time – everything seems to always take much longer than it should, a little bit like watching Gone with the Wind in slow motion – make new lows < $15.

Once upon a time we had the 5 pillars here in Canada, our equivalent to Glass-Stegall in the US. They were the banks, the trust companies, the investment dealers,the insurers and one more that I have forgotten. The dividing lines got blurred and as usual the biggest bully in the sandbox – the banks -  wins all. The process is ongoing. The insurers quickly demutualized and started playing in areas they knew nothing about. Things like UL, Universal Live were introduced only to become an absolute disaster a few years later. Now we have things like Income Plus that combine life attributes with investments, never a good thing. In the Canadian psyche it is unacceptable that a quality company like SLF or, for that matter MFC, should one day trade at $5 or less. The important thing to understand is that SLF then and SLF now are completely different companies.