Then (July 3d) and now charts; 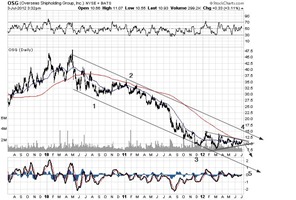 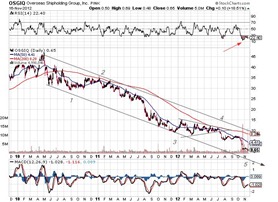 Our guess at the time was about $6. We were wrong as it is now $ 0.65, but at least we got the direction right. At 65 cents the count is essentially irrelevant as it can only go down another 65 cents. Notice also that the ticker was changed, the stock now has an IQ and trades on the “pink” sheets.

The company filed for chapter 11 last week, November the 14th. It did so on a voluntary basis and hopes that this will allow it to clean up it’s balance sheet. It has enough cash on hand to tide it through. This company is one of the largest, the second largest to be precise, in the oil tanker business with a very modern fleet of about 110 tankers. It operates under US flags and consequently benefits from the preferential treatment provided for by the Jones Act. 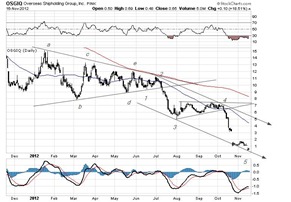 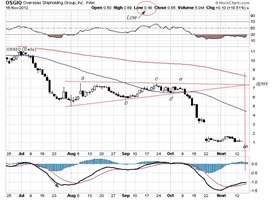 The stock made a low of 48 cents last week. That would fit the count nicely. Analysts, for what they are worth, are pretty upbeat on the company.

Talk to your broker and when you do buy be careful with the ticker symbol , specify the pink sheets, as there are a few other OSGIQ’s , JP Morgan Mid Cap A Fund being one of them. By the way, FRO, Frontline and EXM are  in a similar position but have not filed. See previous blog. Also as noted in earlier blogs , these boats are just fine but there are too many of them. This is what happens when you invest in overcapacity. You have to write it off. Now China has stimulated its economy by investing in capital goods to the tune of 46% of GDP, guess what is going to happen there.