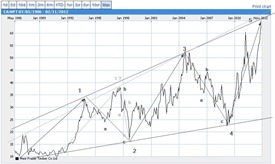 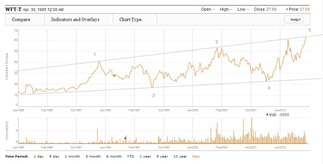 Identical charts except that one is a little more compressed. There are no 5 waves up structures anywhere in this chart, at least not without overlap. This is the signature of an expanding diagonal, which is a wedge that gets wider as it goes through time rather than narrower. The latest storm in the US may just have given it that extra little push and the large swings are no doubt attributable to the rapidly changing opinions with regard to the housing market and where that is in the supposed turnaround. Save for a few dollars to the upside to reach the trend line this is a sell. Of 8 analysts that follow the stock, all have buys and 2 even strong buys. Nobody else is recommending a sell.