Then and now charts; 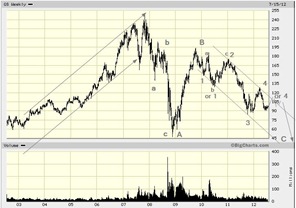 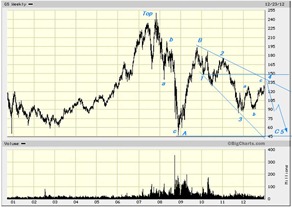 We had this as a buy at $90 for a target of $135. It did not get there (yet) so we changed the outlook to include a triangle and now are changing it back again to the original a-b-c. Also, instead of contemplating a simple 5-wave sequence for wave C, we now prefer the notion that this may be a diagonal unfolding. This would allow for overlap that occurs at about $129 if you assume wave one to be larger than shown in this chart.

The alternate possibility that contradicts most other information, is that this stock is in a new bull market and is presently in wave 3 up. Not very likely. By the way, this pattern is very similar to that of Manulife and Morgan Stanley. Considering that this company is the global finishing school for central bankers and other powerful players we suspect that it will do better than MLF and /or MS.