RBC’s analysts were given the task of finding the 30 “best money-making ideas in absolute terms using a risk-adjusted approach” from the 1500 or so stocks they cover worldwide. Koninklijke Philips Electronics was one of the lucky ones to rise to the top. They put it in the “Medical Equipment and Supplies” category. A more appropriate description would be “Consumer Electronics”. It’s traditional core business was, and is, making light bulbs as the original name, before the Royal prefix was added, attests to. It is to be hoped that this somewhat incorrect classification did not mislead the analyst. Philips is a great company but does it deserve such a recommendation? Here are a chart and some facts; 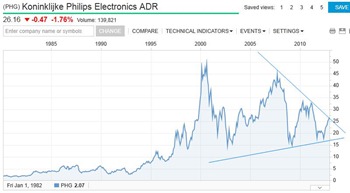 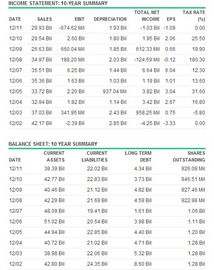 The chart has all the hallmarks of a very large triangle, which could be either a 4th and we should get an explosive run up from the recent lows, or a B-triangle and we should dive into the ground. Alternatively, we are in a much smaller triangle that is in a 4th wave position but of a much smaller degree. We would have just finished wave c and still need to do d and e before going lower to, say the $5 area. On balance the whole pattern is bearish rather than bullish. There are not that many comparable companies but comparisons have been made with GE and SI. Both are more industrial, that is, in the heavy stuff like turbines etc. But just for the sake of the exercise here is the chart and info for Siemens. 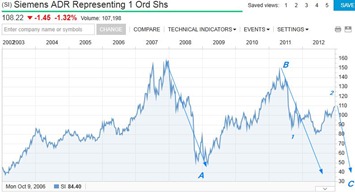 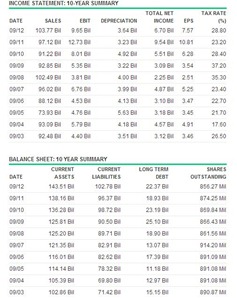 The chart looks bearish overall but there is no triangle here. Relatively SI is higher up between the highs and lows than either PHG or, for that matter GE. But if you look at the 10-year summaries you will notice that SI has done much better, has grown more and has turned out much more consistent profits compared to extreme erratic profitability of PHG. You be the judge.

For completeness here is GE, it may or may not have completed the bear; 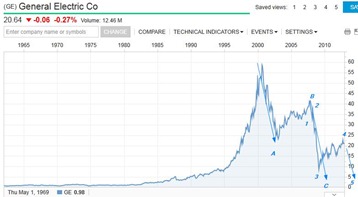 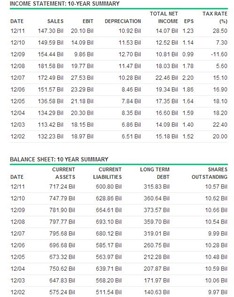