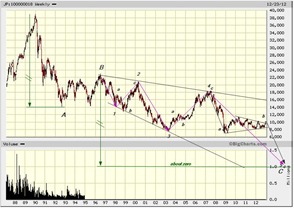 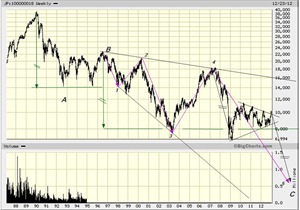 The Nikkei 225 turned on a dime on New Years Eve, 1989, maybe it will do it again this year. We have had this scenario (count) for almost two years. It is absurd and cannot be correct. But here are a few other facts that no one would have believed prior to the peak.

In central Tokyo a single square meter (about 9 sq. ft. for those that are measurement challenged) went for $79,000 at the then prevailing exchange rate of 135 Yen to a dollar.

Downtown Tokyo land values were about $800 mln. an acre and the Emperor’s palace was reputedly worth as much as the entire State of California, or all of Canada.

In 1989 Bankers Trust Canada issued 3 year put warrants on the Nikkei in Canada. They were priced in C dollars and side stepped all the then existing regulations. You could buy them in an RRSP.

After 23 years of on and off stimulation the Bank of Japan has just recently decided to up the ante again by adding about $120 bln. , far too little according to some but at least a start. The country’s debt to GDP ratio is running at about 230% but there is no cause for alarm because it is mostly domestic.

If the Nikkei will in fact go much lower remains to be seen. It would take a break of about 11000 before the count is negated. For the moment this still appears to be the best interpretation. How absurd it really is, is demonstrated by this semi-log Wikipedia chart with my annotations. 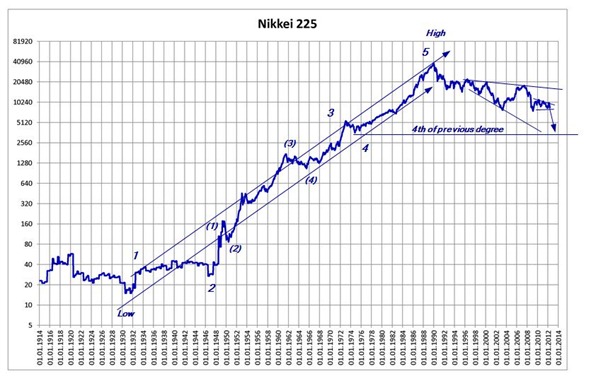