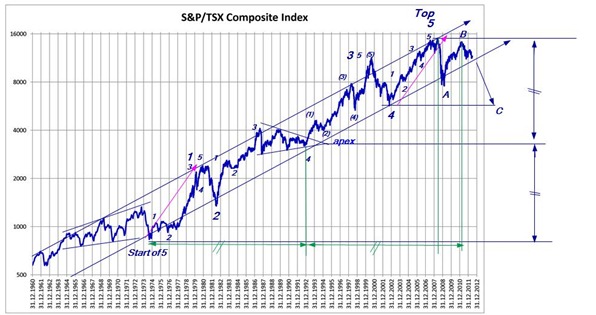 One never really knows if a wave count is actually correct. EW is not particularly good at timing , primarily because all other factors are ignored, quite deliberately, and consequently it is not uncommon that when errors are made they are only recognized years later and after the fact. Also, because there is no road map for the future but there is one for the past, EW has a built in tendency to be “conservative” to put it politely. Another problem is that a minute wriggle somewhere at the bottom can be magnified disproportionately at the top years later.

But there are rules etc. so despite the above you still might get it right. This is , of course, the TSX on a semi-log scale which works better over long periods as equal vertical distances are perfectly proportioned to each other. Apart from EW we also look for symmetry, harmony, consistency, elegance and so on and so forth to increase the probability of being correct. Here is what we have;

As with most charts we assume the start of the 5th wave is in 1974 ( with the Dow there is the argument that it started in 1982, that does not apply to the TSX).The relatively large “diagonal” preceding (always a 5th wave) it supports this assumption. Looking at all the wiggles there is only one that stands out as an absolute sure thing, and that is the triangle from 1986 to 1992. I started in retail during this time and I distinctly remember the existing confusion; there were as many bulls as there were bears. Triangles have to be 4th waves! As it cannot be a 4th of the entire 5 wave sequence (we know now with hindsight) it must be 4 of 3. That fits nicely because it makes 5 of 3 the “extended” wave and, this is very common, makes waves 1 and 5 equal (proportionately). Furthermore the chart can be divided in two parts exactly where the apex is. Time wise that does not work quite as well but if you view a B-wave as a failed 5th, it fits perfectly again. Superficially there does not appear to be alternation between waves 2 and 4, both look like zig-zags, but this can be remedied easily by making wave 2 irregular, which it probable is anyway. During the entire 40 or so year period the index stays (roughly) within the channel. Each time it crosses from the left bank to the right bank (4X) it immediately returns to the other side except this last time! We are now hugging the lower side and we have not yet returned to the 4th wave of previous degree. If 10000 holds the Central Bankers will win and we move on to 25000 + (like Zimbabwe), if not there is a free fall below. At least be prepared.