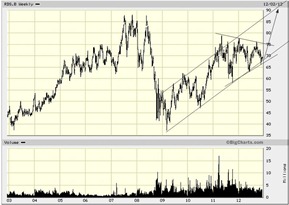 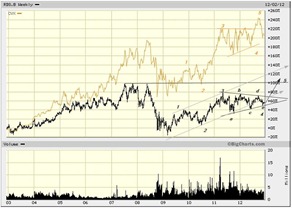 On the left is Royal Dutch, one of the larger integrated oil companies, just like Chevron which we think is a sell because it has so out performed all the others and is totally uncorrelated to the stuff (oil) itself. Both are shown on a relative basis (relative to the chosen starting point!) in the chart on the right. Royal Dutch appears to have completed a triangle but unlike Chevron would still have to make the thrust upwards to complete a 5-wave sequence. So why does one look like it is ready to go down and the other ready to go up? As always the answer is in the details; 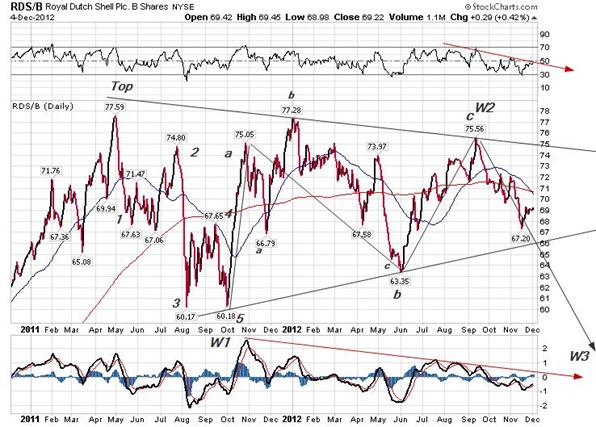 Triangles must consist of 3-wave legs (not 5!) All legs could be said to meet this requirement except the first which is better viewed as a 5-wave leg, despite a single tick failure.(Also the c-leg from the beginning of 2012 to June is probable a “diagonal”, so despite the overlap it still should be viewed as 5 waves). That then becomes wave 1 down followed by a rather clumsy a-b-c correction back up as wave 2. If correct we are presently in wave 3 (at the beginning) and both stocks are aligned. The RSI and MACD seem to be supporting this outlook.

A nice, market-neutral, trade would be to sell Chevron and buy Royal on a 1 for 2 basis, roughly (see spread below). Just don’t use warrants or other option-like instruments as that does not always work out that neutral as the guys at Sprott & Flatiron can attest to.