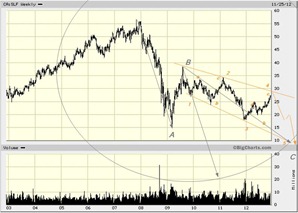 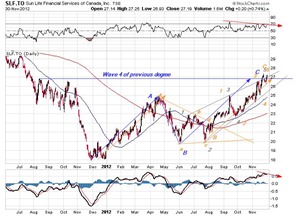 Between $25 and $27 there is some overlap between waves 4 and 1, which normally should not happen. Otherwise the stock traded precisely as anticipated. However, the exception is the “diagonal”, in this case an expanding one where this sort of overlap is not only allowed but quite usual. The diagonal is shown in beige in the big chart. Also shown (in grey) is the entire A-B-C structure within which the C wave is expected to equal the A (roughly) as a vector. A new low ultimately is required but it does not have to go all the way to the  trend line, if more time is spent on getting there. So when you put it all together there are a good number of reasons to get out now if you did not do so at the earlier recommended level of $25.

1. The stock traded back to the 4th wave of previous degree.

2. The short term (1 year +) A-B-C is near perfect in symmetry and magnitude.

3. The big A-B-C is a very plausible expectation.

4. The RSI (and to a lesser extent the MACD) are not confirming the present stock value.

5. The supposed problem of low interest rates will not be solved soon.

7. This blog has called this stock quite accurately; maybe luck will continue.

Time to get out or carry a stop-loss just below the present level.

Great West Life and Manulife also have plausible wave counts to the downside. GWO is the healthiest of the three and MFC the sickest. GWO is also sporting an expanding diagonal or perhaps a triangle, whereas MFC appears to have a contracting diagonal (wedge). 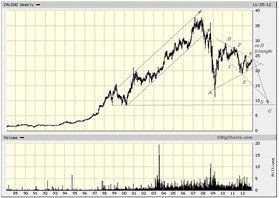 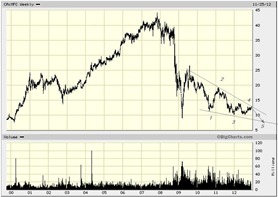