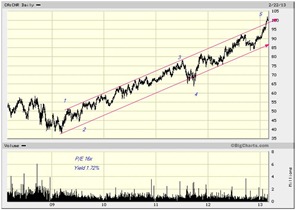 We have no idea what the proper count should be for either of these stocks. Both have gone way beyond our wildest expectations, as has the entire transportation section with the exception of sea going companies that are not represented in the DJT index anyway. So a market-neutral approach may fit the bill. Market-neutral is a term hedge-funds have invented in order to make you believe that you cannot lose money on such a trade. It always works until after you have lost a bundle but this time is different. We propose selling 4 shares of CP and buying 5 shares of CNR. The ratio is not perfect but close enough. The reason is simple, CP is trading at a 42x p/e  against CNR at 16x.  We know these ratios are distorted by very short-term factors but there they are. CNR also yields more. Soon top management will have worked at both places and there will be no secrets left. The two should converge, an approach pioneered on a large scale by Long Term Capital, that should prove successful provided you have the stamina (which they did not). This has already happened. Next they should diverge, each going their separate way as these two companies should given their totally incomparable operations and geography.  Given the clear throw-over on the CNR chart this spread trade should blossom sooner than later. Good luck.

An alternative is simple shorting one or the other or both, we think CNR might do a little better (that is worse) than CP.