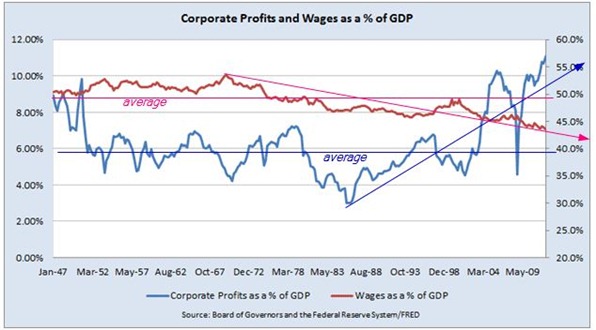 This chart has shown up in various different blogs and since it is from the Fed.(St. Louis), I am taking the liberty to use it here as well. I have added two horizontal lines approximately where I guess the average would be over this sixty-six year period. Also added are directional arrows highlighting the direction in which these variables have been moving. The chart is difficult to read. The left hand scale  tells you what percentage of GDP (Gross National Product) corporate profits , after tax constitute. So the average would be about 6% of GDP. The right hand scale shows what percentage “wages and salaries” are of GDP, about 50% on average.

The Fed. has a dual mandate. Keep prices stable which equates to keeping the value of the dollar constant (with 2% deliberate slippage!), and keep the population employed, newly defined as below 6.5%.  Anyone that has even remotely sniffed at economics will know that these two are mutually exclusive but that should not bother politicians. What should bother them is that it demonstrable does not work.

A little known fact is that governments are always net borrowers. Corporations can be both borrowers or lenders but on balance the are also borrowers. Households, even if they are not always aware of it, are always net lenders. Artificially low interest rates therefore give an advantage to corporations. They also promote capital intensive activities at the expense of labour intensive activities. I could go on for hours on this topic, the simple point  , however, and this is demonstrated in spades by the above chart, is that the goal is not achieved.  Apparently  Sir Mervyn King, the predecessor of Mark Carney, at the Old Lady of Threadneedle street, learned as much today when his board failed to support him in his quest towards more stimulus. Writing on the wall??