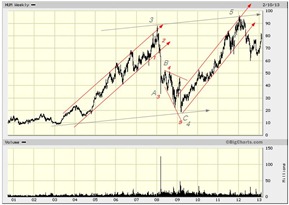 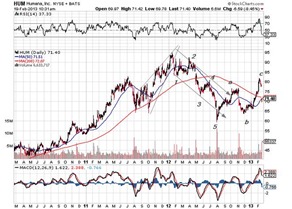 Humana  has had a rollercoaster performance over the past 10 or so years. From $10 to $90, back to $20 and then back up almost to $96. As seems to be the case in almost every instance, there is no perfectly clear and unequivocal wave count that readily fits this pattern. It must either be a 4th and 5th wave one after the other or  a 5th wave followed by an irregular B-wave. There are some problems with that as the intervening drop might be viewed as a 5-wave move rather than an A-B-C.    However, looking at the short term chart, we appear to have 5-waves down followed by an a-b-c up retracement. Furthermore, today’s drop of 8% or so has all the earmarks of the beginnings of a third wave. A sell.