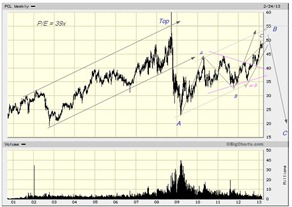 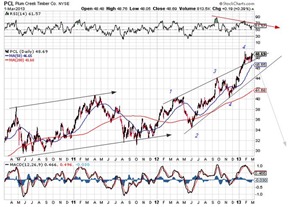 Our attention was drawn to this stock by an article by M. Cembalest who commented on the P/E ratio of some stocks that might be announcing the fact that once again we are in a bubble, again created by the Fed. Here we look only t the EW implications.

The spike top in late 2008 looks like a misprint so we may be close to double topping. In any event the move from the 2009 lows to where we are today is without a doubt a B-wave. The only uncertainty is whether or not the (small) A-B-C up has a flat or a triangle in the B-wave position. The difference is not critical to the conclusion. Assuming it is a flat then the next pattern is a clear wedge. It has the required 5 waves (3 up, 2 down) has overlap and the three up legs relate to each other  as 9.13 to 9.75 to 9.01 As wave one is already shorter than wave 3 , no definitive predictions can be made (wave 3 may not be the shortest!) but, notwithstanding that, and certainly given the throw-over that has already occurred, it is unlikely that this stock goes much higher. The RSI tells the same story.

Fundamentally it is not clear why this stock, despite the gradual recovery of the building sector, should trade at the same levels it did during the peak boom years. A sell in our opinion with an initial target around $32.