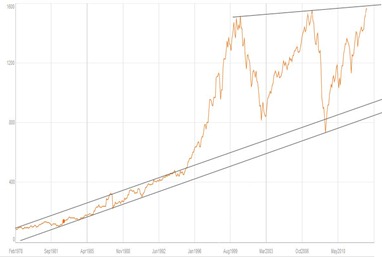 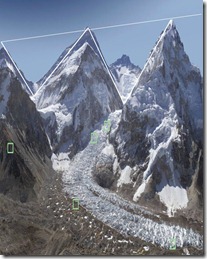 Mount Everest syndrome, in my vocabulary, stands for this phenomenon that you climb it for no other sensible reason than that it is there. I suspect that Bernanke and his co-conspirators at a whole slew of other central banks in the world, most prominently those of China, the ECB, Switzerland, the UK and now again  Japan, all want to get to the top just to be able to say that nothing really happened as a result of the great recession.

The mountain was first successfully climbed by the New Zealander Edmund Hillary and Tenzing Norgay, a Sherpa climber from Nepal, back in 1953. Locally the mountain was known as “Holy Mother” but was named after an English bureaucrat surveyor George Everest for fear of offending any one of the many ethnic groups that might claim parenthood to the mountain, preferring to, in good English tradition, offend them all. Since 1953 some odd 8,000 people have attempted to climb the mountain, resulting in 250 or so deaths, mainly due to altitude sickness or the tragic events immediately following.

What is not well known by the financial community of the World is that the mountain has had an almost 100% perfect correlation with the S&P. This is an impeccable record not matched anywhere else. Using an optical illusion it is perfectly clear that a high of 1565, give or take a point, will do the trick and then there is a precipitous drop right ahead. There is no need to do anything now, we are almost guaranteed to get there. But once we do, don’t let it get to your head as it is definitely time to get out. To gain a “feel” for the coming drop, here is that picture again; 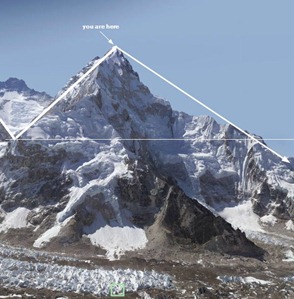 P.S. For those who are wondering, Mnt. Everest is the one in the middle. The photos, without the white lines, are by David Breashears. Tomorrow we show the Matterhorn against the Swiss SMI index.